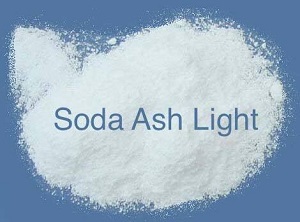 Soda ash light is known as a white powder, without any smell, easy soluble in water. also well known as sodium carbonate , washing soda , crystal soda with formula Na2CO3 .Soda ash firs found in Egypt, Egyptian use it for They used it to reduce the melting point of silica sand to produce glass vessels and ornaments soda ash is almost more than 5000 years from the day founded .
There are two kind of soda ash naturally occurred soda ash which produce with trona ore and after filtration its ready to use this grade available only in turkey and USA another type is syntactic soda or inorganic soda ash which produce by some chemical product in a simple word its produce from combination of sodium and acid carbonic and re acted with ammonia.
Soda Ash Light is used for production of detergents, chemicals, textile, paper, other sodium compounds and for casting industry, oil refineries.

In the paper industry, sodium carbonate light grade is used as an acidity regulator as well as to decolorize waste paper. used in the cooking of bark fibers or any native plant fiber. Soda ash is strong enough to dissolve out the non-cellulose parts of the fiber, yet it will not weaken the finished paper. In the Kraft paper process, soda ash plays a major role both as a vital constituent for minor pulping and as an intermediate chemical formed in the regeneration process. As an example, soda ash, as a cheaper additive, might be added to the digestion process if an alkali is desired as the makeup chemical to produce a higher NaOH or Na2S ratio and fed to the smelt dissolver system.

Soda Ash light and is used to treat most types of calcium ion contamination in freshwater and seawater muds sod ash resulting in increased rheology, gel strengths, and fluid loss. High-filtrate calcium causes precipitation of calcium-sensitive additives. Over-treatment with Soda Ash can result in carbonate alkalinity and consequent excessive gel strengths and problems due to increased fluid loss. A soda-ash treatment is appropriate for gypsum contamination because caustic Soda, NaOH, is not needed to raise ph. It is also generally the case with hard water influxes into water muds. Incidentally, for cement contamination, sodium bicarbonate is a better alternative.